You may have noticed that the Land of Enchantment could also easily be called the Land of Endless Blue Skies. Having spent nine years of my life living in and around Los Angeles, the lack of smog is definitely one of the things  that separates us from that other sunshine soaked location. In fact, in the Albuquerque area there are really only two times when that beautiful blue ceiling is disturbed. The first is when those Spring winds kick up dirt from the West and slam it against the Sandia Mountains. 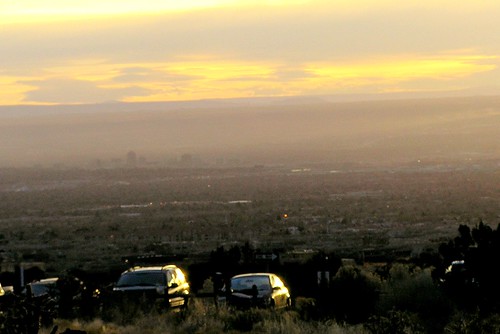 The other time is when a raging wildfire fills the sky with smoke. In fact, I remember at least one occasion when our skies have been filled from Arizona wildfire smoke. Nothing illustrates the absurdity of Monday’s vote by the outgoing Environmental Improvement Board (EIB) than the fact that natural or unnatural air pollution doesn’t stop at a state’s border:

One month after passing a controversial cap and trade agreement, the New Mexico Environmental Improvement Board (EIB) on Monday (Dec. 6) passed another sweeping measure aimed at lowering the state’s greenhouse gas emissions.

By a 4-1 vote, the EIB passed a statewide, New Mexico-only plan that places a cap upon the amount of emissions generated in the state. The plan was headed by the environmental group the New Energy Economy (you can see some of the details of the plan here.)

I’ve complained about the manner in which this appointed Board has conducted itself for years, and I’d like nothing more than to see it dismantled. They have served one purpose and one purpose only. Namely, they are a classic example of what happens when you form a pseudo governmental body that has nothing constructive to do.  They start creating regulations where none are needed in order to give themselves purpose. When that happens, the losers are inevitably the voting public who find themselves subject to “laws” created by unelected “representatives.” Just one more example of how freedoms taken for granted can so quickly be taken away.